A Client Turn Its Backlog Into Revenue

Late in 2015, Vee Technologies was approached by a new client having difficulty with their radiology coding system. They were depending on a computer-aided tool that did not adapt well to the type of radiology work being done, causing a three-month backlog.

Sales, Operations, and Human Resources at Vee Technologies came together to put a plan in action. The client needed manpower– manual coders that could clear the backlog the computer-assisted tool could not. If the problem couldn’t be resolved, it would have eventually caused a domino effect for them. Charts would not have been coded in time, and business for the client would have been lost. To add to the issue, there was no time to waste, they were also on a tight time schedule to get their charts coded and sent to billing. This process had to be done by the timely filing deadline, or the payor could levy penalties.

Vee Technologies stepped in and was able to develop a plan which included training their own staff to run the new coding system. They started with cross-training the company’s own HCC coders on radiology. The client needed a large number of coders in a matter of six weeks, and since Vee Technologies did not have the necessary radiology coders readily available, they obtained the first 30 coders from staff that were already on board. Coincidentally, these coders were HCC trained and their season had just ended. The team implemented a training regime that was customized specifically for the client. This training that was normally done in three weeks was now done in one.

To ensure accuracy was achieved, they implemented client-specific testing. After 30 coders had been identified, Vee Technologies worked together to get this team ready and ramped up; moreover, they started the project with quality and assurance, making sure all charts were coded on-time and properly.

While all this was taking place, Human Resources, Operations, and Sales were putting together teams to work weekends and nights to source, recruit, and onboard. After the new staff was brought on, they went directly into training. This ramp-up was supposed to include 25 to 30 coders in six weeks, although when the client witnessed how quickly Vee Technologies was able to put together a quality team, they bumped the number up to 80. Vee Technologies hired 80 FTE’s in 30 days and was able to clear the client’s backlog in 30 to 60 days. With a bit of creativity, and by training coders that were already on staff, Vee Technologies was able to start clearing the client backlog quickly. 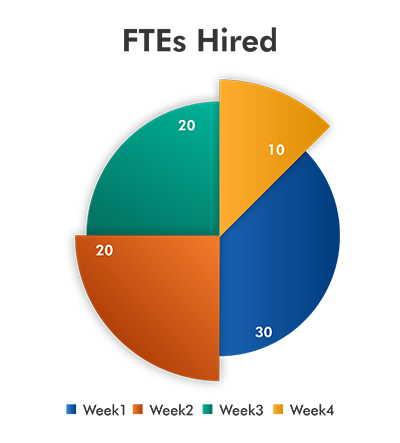 In the end, the backlog was cleared. Vee Technologies solved the client’s problems and still continues to manage their volumes today. Our team was able to envision the proper training and development that was the quickest, and most feasible way to help this client achieve their goals. Vee Technologies employed:

All of these qualities equal success. This is just one example of how Vee Technologies used their advisory and consulting resources to proactively find a way to completely change the outcome for a client in need.

How Vee Technologies Helped A Client Turn Its Backlog Into Revenue